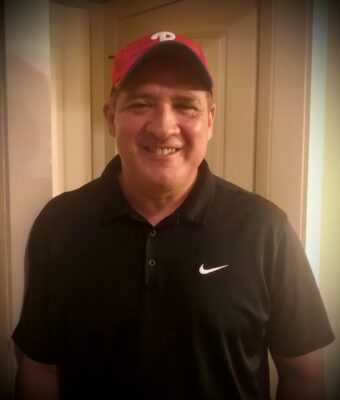 Friends are cordially invited to a visitation with the family from four o’clock in the afternoon until nine o’clock in the evening on Sunday the 11th of December, at Aguero Funeral Home and Crematorium, 4402 E. Saunders St. in Laredo. A vigil for the deceased will commence at seven o’clock.

Mass of resurrection will be held at ten o’clock in the morning on Monday the 12th of December, at the St. John Neumann Catholic Church, 102 W. Hillside Rd.., Rev. Fr. Salvador Pedroza is to officiate. Funeral procession will depart the funeral home at nine-thirty in the morning.

Inurnment will be held at a later date.

Fred graduated from J. W. Nixon High School in 1987; while at N.H.S. he was a proud member of the Mustang Baseball Family. Mr. Rodriguez received his Bachelor of Arts degree in Political Science from the last graduating class of Laredo State University in 1992. He became an educator and head coach at Elgin High School in Austin, Texas, before moving on to work for Family Heritage for 19 years. He recently obtained a master’s degree in public administration (MPA) and was working towards a doctoral degree in public administration from Capella University.

Those that knew Fred knew his love for sports and rock music. There was not a day when music was not in his life. Fred’s passion was instilling education in the youth. He was always a mentor to his family and close friends. He was a compassionate man who gave selflessly to those that needed him.

He will be dearly missed by his family, friends, and those whose lives he touched.

Honorary Pallbearers will be Gilberto Iruegas, and Rafael Lozano, III.

Special thanks to the medical teams at Brooks Army Medica Center, who provided expert care.