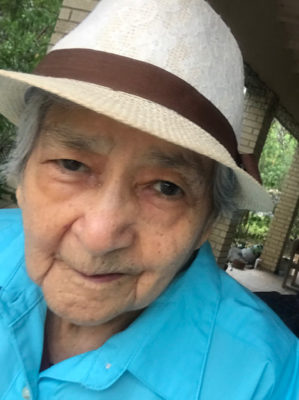 Funeral services will be held Thursday, October 22, 2020 at 8:30 a.m. from Aguero Funeral Home and Crematorium to Blessed Sacrament Catholic Church for a Holy Mass at 9:00 a.m.

In accordance with CDC safety precautions, we ask everyone attending funeral services to wear a mask and practice social distancing. There will be limited seating for services. For everyone’s safety please honor the family from a distance. We kindly thank you in advance.

God called to heaven His very special angel, Ms. Candelaria Sanchez Guerra, who graced this earth with her loveliness, charm, faith, love, joy, fidelity, loyalty, ceaseless wit and playful exuberance for 89 God-gifted glorious years. However, she is gone far too soon for her grieving family. Family left to treasure their memories of her include her daughter, Anita L. Guerra; sisters Guillermina “Minnie” (Kenneth [deceased]) Lane; Basilisa“Basi” (Amador [deceased]) Munoz; Anita Villarreal; Ciprianita“Cipri” Powell as well as countless nephews, nieces, grandnephews, grandnieces, great-grandnieces, great-grandnephews and close friends. She is preceded in death by her beloved parents, Zacarias and Cipriana Sanchez; her cherished brothers Victor Sanchez, Anastacio Sanchez, Eloy Sanchez, Crescencio “Chris” Sanchez, Eustacio Sanchez, and her treasured sisters Juanita “Janie” Rivera, Amelia “Amy” Pruner, Soledad Welder, Felicitas “Fela” Morales, and numerous nephews, nieces, grandnephews, grandnieces, great-grandnieces and great-grandnephews.
The beatific Candelaria was born in Kyle, Texas, on Candlemas Day, February 2, 1931. The daughter of sharecroppers, she grew up in the rural areas surrounding Kyle and Buda. Growing up working on the farms and ranches with four brothers and eight sisters, Candelaria felt she was bestowed a particularly idyllic childhood. She remembered fondly working out in the sun picking cotton as a small child; spending time with her large, gregarious family; tending to the cows and chickens; working in the outdoors doing farm work; playing for marbles; climbing up trees; and going to elementary school, where she learned to recite poetry that she continued to recite by memory throughout her adult life until her memory started to fail in her late years.
Candelaria moved to Laredo, in 1947, and settled in the then sparsely populated eastern neighborhood of Ghost Town. Along with her sisters, Ms. Guerra moved from the parish of Christ the King Catholic Church to the newly built Blessed Sacrament Catholic Church, established in 1950. She always remembered fondly how Msgr. George Gloeckner adored her first name since it meant, “Full of the Lord’s light.” When her mother died at a relatively young age, Candelaria worked numerous full time and part time jobs simultaneously to help support her younger brother Chris and four younger sisters Guillermina, Amelia, Ciprianita, and Anita through school. For many years, she happily and devotedly worked at the Office of Dr. Murray E. Malakoff, who delivered her only child, Ms. Anita L. Guerra. She then worked as a bookkeeper, secretary, and office manager for numerous years for Laredo Pest Control under the ownership of both the Bryant family and later Mr. Ralph Stevens before retiring in her late 60s.
She is best known as a devoted, caring, and nurturing person. A single parent, Ms. Guerra was exceedingly protective of her only child, sacrificing and scrimping so that her daughter would be blessed with love and receive the type of education she could not provide for herself. This included enrolling her at Blessed Sacrament Elementary School, which provided a strong foundation for her faith and learning under the leadership of the Salesian Sisters.
During her retirement years, Candelaria would continue to sing songs, recite poetry, tell stories, cook, bake, and lovingly tend to her yard, plants, dogs, and her beloved daughter. As she was always a woman of great faith, Ms. Guerra—in her retirement years—would devotedly go to church 7 days a week, including morning mass on Monday at St. Joseph Catholic Church, morning mass on Tuesday through Saturday at Holy Family Catholic Church, as well as evening mass on Saturday and noon mass on Sunday at Blessed Sacrament Catholic Church. She recited her rosary every night without fail and would recite it during road trips to ensure a safe journey.
Candelaria particularly enjoyed relaxing on her outdoor swing with her dogs and telling others stories of her youthful adventures growing up at a ranch. For example, how she would hide eggs from the chickens in the mailbox so she could exchange them for pencils at the ranch owner’s store to use for her elementary school work. Because of her great love of nature—which included caring for her plants, trees, yard work, and animals—she always remained a devoted dog owner who treated her pets as if they were her children.
She had numerous friends from church who were as loyal to her as she was to them, including Ms. Olga Laurel, Ms. Rosina Martinez, Ms. Lupita Ortiz, Ms. Librada Calderon, Ms. Catarina Aranda, Ms. Angelita Checchin, Ms. Esther Salinas, Mr. Roberto Vela, Judge George P. Kazen, and Ms. Juanita Garza. Friends, neighbors, and acquaintances often remarked on her great faith, thoughtful nature, often witty remarks, and notable intelligence. Although she led a simple, devout life, everyone who was acquainted with her knew what a truly extraordinary person she was.
The family is very deeply appreciative of the pastoral work of Sister Rosemary Welsh of Mercy Ministries, Father Pedro Nolasco Hinojosa, Jr., of Holy Family Catholic Church, and Rev. Father Wojciech Przystasz, of Blessed Sacrament Catholic Church, who anointed Ms. Candelaria Sanchez Guerra as well as administered the Sacrament of the Sick with Absolution and the Apostolic blessing (Last Rites).