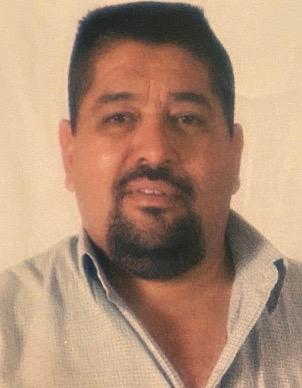 Funeral services will be held Tuesday, August 25, 2020 at 10:30 a.m. from Aguero Funeral Home and Crematorium to Blessed Sacrament Catholic Church for a Holy Mass at 11:00 a.m.

In accordance with CDC safety precautions, we ask everyone attending funeral services to wear a mask and practice social distancing. There will be limited seating for services. For everyone’s safety please honor the family from a distance. We kindly thank you in advance.

On Thursday, July 30, 2020, David J. Cantu Jr. 54, was called to serve our lord in Heaven. He was a loving husband, father, brother, uncle, friend, and son. David J. Cantu Jr. was born on January 30, 1966 in Laredo, TX, to David and Dora Cantu. He was loved by all his family, friends and peers for his unselfish attitude towards all and his sense of humor. David was the oldest of five children and he steered the way for his siblings. On July 2nd, 1991 he married his love of his life, Rosa Isela Nunez. They raised two incredible children, David Joseph and Danielle Cantu.

After graduating from Nixon High school, he became an entrepreneur in Auto Painting & Auto Repair Industry, Construction, Realty and worked for Carters Express Trucking. David was efficient, energetic, and diligent with his work. He was devoted to his family, loyal to his friends, and faithful to God.

David’s passion was serving God, his family and people. The People who knew him, know he was a devoted Christian, and a servant of God. His mission was to help guide others to God and heaven. David spread God’s word. He lit up when he shared God’s word to those who knew him, if you close your eyes you can still hear the passion in his voice when he spoke to you about God; or quoted a verse from the Bible. Everyone who knew David knows he was a remarkable man. David left us too soon, but he knew God needed a servant leader and he accepted our Lord’s calling.

David clearly modeled what it means to be a good Christian. We can honor him by following his example and serving God by serving others as well as he did.

We will remember the unforgettable experiences and memories he made with each one of us. His laugh, his jokes, and conversations will remain with us in our memories forever. We will remember the lessons he showed us: Let us love our families really well, let us serve others with as much as we’ve got for as long as we can, Jesus Christ is the hope that we all have for salvation, and God loves you and it’s always a good day for all of us to give Jesus more of our lives.

David Jr. would want us to remember how he was and that we have peace with God through our Lord Jesus Christ.