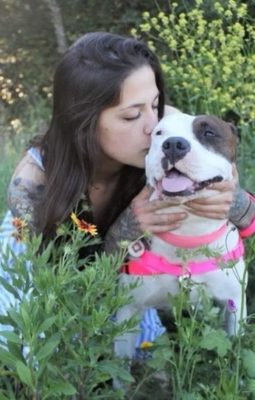 In accordance with CDC safety precautions, we ask everyone attending funeral services to wear a mask and practice social distancing. There will be limited seating for services. For everyone’s safety please honor the family from a distance.

Born in Laredo, Texas, on April 26, she was graduated from J. W. Nixon High School. She later graduated from Animal Care Officer Academy in San Antonio.

Driven to make a positive impact on the world, she joined the Field Division of the San Antonio Animal Care Services to support the safety and protection of animals. Being an Animal Care Officer (ACO) was more than a job to her; this ACO team was her second family, especially her two best friends, Kendall and Alexandra (Wifey).

Erica was passionate about all animals, with a special affinity for dogs. She adopted her pit bulls, Wednesday and Roger, whom she loved as her children. Although she had no children of her own, her nephew, Jay Montzon, had her heart and she loved him as her own son.

Equally important, Erica was a self-starter. She had an affinity for tattoos and had set a goal to become a tattoo artist. She purchased the necessary equipment and had started tattooing on herself and other willing subjects. Her own arms were adorned with sunflowers, honeycombs and honeybees. She also loved eating and was learning how to cook.

Spending time at the beach and attending music concerts were favorite pastimes of hers. She especially enjoyed heavy metal bands, such as Slipknot. She could sing along to every lyric and loved the energetic concert experience.

Erica appreciated life to the fullest and firmly believed in going with the flow of life rather than letting life get you down. Her philosophy was to brush things off and move forward. Her carefree approach to life gifted her with the ability to find humor in everything, even when she was unceremoniously dropped into the bathtub by her two best friends while climbing through the bathroom window after being locked out of her house. Her reaction was hysterical laughter. She remained clear minded and joyful in all circumstances.

Although she was young, Erica was committed to serving others to the end and had taken steps to do so early in life. She signed up to have all her organs donated to those in need and, as a result, has now saved many lives.

The family expresses special gratitude to the San Antonio University Hospital Trauma Team, especially Erica’s two nurses, Laura and Tara, for their phenomenal care. They consistently went above and beyond in both their service and care.

Shorty, as she was affectionately called by her mom, was a kind-hearted person who proudly stood her ground for her beliefs. She had the softest, sweetest soul and was simultaneously fierce. All who were fortunate to know her will sorely miss her giving heart, staunch support, and humorous, loving, carefree approach to life.

In lieu of flowers, the family suggests donations to the Grand Companions Humane Society, a non-profit organization that helps people save, honor, and connect with pets. Donations may be made via their website at grandcompanions.org.