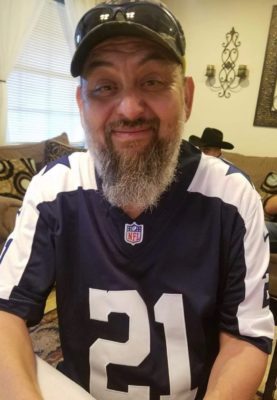 As per family request we ask everyone attending funeral services to please wear a mask and practice social distancing.

On Wednesday, March 10, 2021, Jorge “Choche” Cantu, 50, was called to serve our Lord in Heaven. He was a loving husband, father, brother, uncle, friend, and son. Jorge Cantu was born on October 8, 1970 in Laredo, TX to David and Dora L. Cantu. He was loved by all his family, friends and peers for his unselfish attitude, kindness, and his sense of humor. Jorge was the fourth child of five children and he always brought laughter, love, and peace to his family and friends. On August 30, 1991, he married his high school sweet-heart Leticia Carrillo. They raised four loving children, Jorge Cantu Jr., Daniel Cantu, Elsie Cantu, and Norma Cantu.

After graduating from Nixon High school, he became an entrepreneur in Auto Painting, Auto Repair, Construction, and worked for the City of Laredo Utility Department for several years. Jorge lit up the work atmosphere for his co-workers with his positive attitude and sense of humor.

He was devoted to his wife of 30 years and his family. Everything he did in life was to serve his beautiful wife and children. They were his world! He was beyond joyed to know that he would soon be a grandfather to a baby girl which is expected to arrive on August 30th.

Jorge’s passion was spreading love, kindness, and a smile to his family, friends, and people. He had the sweetest smile and the most contagious laugh. People, who knew him, know his love and smile would spread like wildfire. He was always ready to help his friends and anyone in need. Those of us who knew him know we are lucky to have had a once in a lifetime friend like him who made them feel special and loved. He shared many laughs and smiles with his friends, but most of all he always pushed everyone to be kind. We take comfort in knowing that his kind, caring, and generous spirit lives on joyfully in the many friends, family, and relatives who were blessed to know him. He touched many lives bringing joy, laughter, and kindness to people.
Jorge left us too soon, but he felt God’s arms around him, and he no longer felt pain and he accepted our Lord’s calling. Even though it breaks our heart not to see him with us, we know he is rejoicing in heaven with his brother and Mother, and many other passed loved ones. Our hearts are aching, but they are full of the love and memories that he shared with us.
His laugh, his jokes, and stories will remain with us in our memories forever. We will remember the unforgettable experiences and cherish all the memories he made with each one of us. We can honor him with a smile and by spreading kindness to all, as he always did.