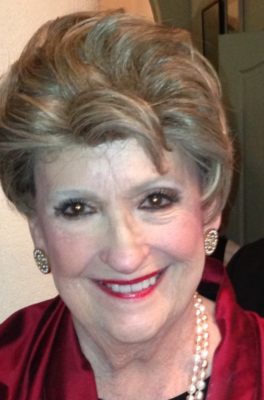 A celebration of Julia’s life will take place on Friday, February 11, at Christ Church Episcopal, 2320 Lane Street.  The family will receive visitors from 9:00 – 11:00 with a funeral service at 11:00.   Those so led may make charitable donations to Christ Church Episcopal or to the Fine and Performing Arts Program at Texas A&M International University.

Due to the current Covid pandemic, those attending are encouraged to wear a facial covering throughout the duration of the service.

Julia Richter Watson Jones, beloved daughter of Laredo and family matriarch, passed away peacefully at her home on February 6, 2022.  Born on August 21, 1933, to Horace E. Watson and Helen (Dolly) Richter Watson, Julia was the last survivor of the nine Richter first cousins, grandchildren of August C. and Julia H. Richter.  August Richter founded Richter’s El Precio Fijo, which was a mainstay in South Texas and Northern Mexico from 1881 to 1996.  Julia was raised in the home her grandparents built in downtown Laredo, which home is registered in the Texas Historic Landmarks.

Julia attended Laredo public schools, graduating from Martin High School in 1950.  She was presented by the Society of Martha Washington in 1949.  She then attended the University of Texas at Austin, where she was a member of the Alpha Chi Omega sorority.  She graduated with a degree in education in 1954.

While a student at the University of Texas, Julia married her high school sweetheart, James K. Jones, Sr. Upon their graduation, Jimmy entered the Strategic Air Command of the U.S. Air Force, and the young couple was stationed in various U.S. cities.  Their eldest son, James K. Jones, Jr., was born in Mariana, Florida.  Soon after, came Robert Edward Jones, who died in infancy.  Upon returning home to Laredo, the Jones family was completed by the births of daughters Julia Elizabeth and Margaret Helen.

Julia was tremendously devoted to her family. Julia had the rare talent of creating an uncommonly beautiful home that was, nonetheless, welcoming, and warm. The Jones home on Clark Boulevard was the gathering place for all the Jones kids’ friends. With Julia at the helm, there was always room for more- more fun, more friends and family, and more to learn and do. Over the course of her lifetime, Julia maintained many friendships, some of which became multigenerational as children and grandchildren came along. Julia’s family members are grateful for these friends and all they have shared over so many years.

Julia’s faith and love of the arts carried over into her community activities. Julia was a life-long member of Christ Church Episcopal, where she served as Senior Warden and was a member of the choir, altar guild and Saint Cecilia’s Guild.  Like her mother before her, Julia was instrumental in the Laredo Civic Music Association.  She was also a founding member of the Laredo Philharmonic Orchestra Association. She served in many board and officer positions of the Society of Martha Washington and was honored to portray Martha Washington in 1977.

When her children were all grown, she commenced a teaching career with the Laredo Independent School District.  Countless Laredo elementary students benefited from Julia’s love of the arts, music, and travel, which she added to the traditional curriculum. She was honored to be named LISD Elementary Teacher of the Year.  She hosted egg hunts and other gatherings at her home for her students, intent on making them feel special.

Julia was very proud of her family.  Though her father died when Julia was but an infant, she was very aware of how blessed she was to have a stellar mother and large and loving Richter/Watson family.  Julia’s brother, Horace E. Watson, Jr., was like a father to Julia, and she adored him.  Julia loved sharing the art of her sister, sculptor Helen (Whitey) Richter Watson.  Julia served as a president of the Dolly Richter Watson Charitable Trust, established by Whitey to honor their mother and to benefit aspiring young local artists.