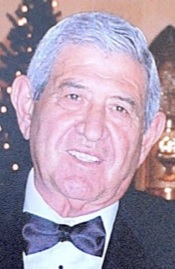 In lieu of flowers donations may be made to act.alz.org for Alzheimer’s research and support.

Teodoro or Lolo, as he was affectionately called, was born on April 1, 1935, in Carrizo, Nuevo Leon.  From a very young age he was hard at work gathering recyclable bottles and replacing them with new ones in exchange for a small bit.  At the age of 18 he married Maria Luisa Berlanga, his one true love and life’s companion.  The newlyweds spent their first few years of marriage in Chicago, Illinois where Maria Luisa cared for their first and second born, while Lolo spent many working hours with Vulcan Materials Quarry as a bulldozer operator.  The superintendent of the company entrusted him with his own set of keys to the quarry which he held in high esteem.  He continuously put forth this type of responsibility and would sometimes go to work in the middle of the night in subzero temperatures, which he always did with great pride and dedication.  Once expecting their third child, Maria Luisa moved to Laredo in order to be closer to family members who could help with the little ones.  Although they lived apart for some time, they would reunite as often as his work would allow.  Once permanently united in Laredo, Lolo and Nana completed their family with two more sons.  It was then that he purchased his first dump truck and would provide hauling of materials for Castaneda Dump Trucks and Leyendecker Materials among many others.  His hard work and dedication would naturally yield more fruits in both his business and family.  His one dump truck and one employee grew into a multifaceted construction company.  He would eventually maintain Missouri Pacific, the now Union Pacific, railroad crossings and rail lines throughout the south Texas region.  Teodoro was a major contributor for many local large construction projects, such as, Port Laredo’s rail yard, Laredo Columbia Solidarity Bridge, Loop 20 extension and Texas Spur 400, to name but a few.   His business, although greatly successful, was not his only priority.  His unparalleled dedication to faith, family, and community is what set him apart.  During their 60 years of marriage, Teodoro and Maria Luisa worked tirelessly and selflessly to help expand Holy Family, a Mission of Guadalupe Catholic Church, into what it is today, Holy Family Catholic Church.  During those days, they worked together in the kitchen and held plate sales, loterias, and Jamaica’s to raise funds for the new church.  The couple were also wholeheartedly committed to the Cursillo movement and spent much of their time volunteering and cooking for numerous retreats.  During the fledgling years of his business, Teodoro, and family, at the request of Maria Luisa, would make summer treks up north and work as migrants in the fields of Utah and North Dakota.  This experience and the lack of healthcare services for migrants during this time, led to a pivotal moment for the Laredo Community’s health in general.  He was the Board Chair of the Laredo Webb County/Migrant Urban Health Initiative program managed by The City of Laredo at the time. After a confrontation ensued for control of the program, Gateway Community Health Center was born under the direction of Miguel Trevino, Jr., CEO and the newly appointed and current Chairman of the Board, Lauro A. Garcia.  Teodoro served on Gateway’s Board of Directors for several years and continued to champion for healthcare insurance coverage and primary medical services for migrant workers and their families.  It goes without saying that if he dedicated his whole heart to faith and community, that he would most affectionately provide the same for his family.  He lovingly and again selflessly gave of himself for his five boys, then their wives and families.  He was always there for love, (although sometimes tough) support, and words of wisdom for no matter what life was bringing our way.   Although sometimes stern out of necessity, he usually had a wit about him and could usually lighten up any situation with something to chuckle at.

Our beloved Lolo required 24-hour assistance and care over the past several years due to Alzheimer’s disease.  It was during these years that all of his children would then rally to provide him with the same love, care, and support that he so selflessly gave us.  Sons, Jesus (Liana Cynthia), Eduardo (Maria Elena), Jose Armando (Alexandra), Teodoro (Leticia), and Mario (Davyne).  Grandchildren, Cynthia Selina, Erika Christina, and Jessica Yvonne.  Eduardo, Jr., Catalina Alexis and Roberto Javier.  Jose Armando, Jr. and Rogelio Gerardo. Teodoro, III and Marco Antonio.  Elysse Judith and Anneka Amelie.  He also had 18 great grandchildren and many other surviving extended family members.

Although his are difficult shoes to fill, we are certainly proud to be part of his legacy and hold all that we learned and shared to heart.  It is with immense gratitude that we must thank his care givers Lali Garcia, Claudia Solis, Elena Eguia, and Amalia Aguilar who were with all of us until his last breath. Finally, we would like to extend a special thank you to Dr. Isaias Garza and the team at St. Jude Specialty for providing their generous care and attentiveness towards Teodoro over the years.

We are certain that this most humble servant of God was welcomed into his eternal rest by the choir of Angels and Saints, God in all of His glory, and his beloved Maria Luisa.  Forever in our hearts Lolito.